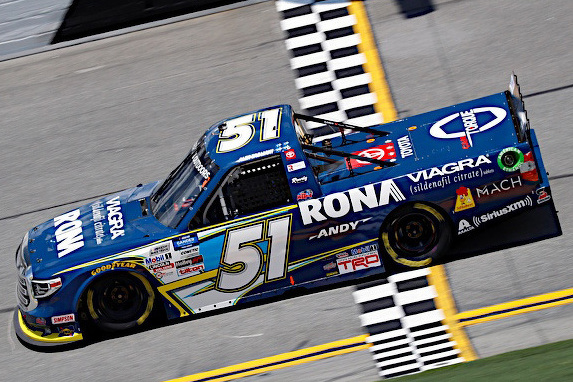 Tagliani on track in the #51 at Daytona
August 17, 2020 - New starting rules awaited Alex Tagliani when he arrived at Daytona International Speedway Road Course this past weekend. Based on new rules, TAG would start 21st on the grid in Sunday afternoon's NASCAR Gander RV & Outdoors Truck Series race and would have to patiently work his way to the top of the field. Whatever race strategy Kyle Busch Motorsports used, it worked well for the first two segments of the Sunoco 159 and Tagliani found himself in second place behind his teammate Raphael Lessard in truck #4.


Then on lap 27 everything fell apart for Tagliani when the green flag was waved for the third segment and both trucks touched. The damage to Tagliani's number 51 KBM truck was severe. Following the contact, part of the left front end was rubbing against his tire and the front end of his truck was also damaged, causing the engine to overheat.


"It's not the kind of result I was looking for and it's a bit sad, especially since the truck was nearly demolished by my teammates in trucks #4 and #18 near the end of the race," said a disappointed Tagliani. "Before the incident, everything was going as smooth as we had planned and the truck was running real fine. I did not push too hard in the first two segments of the race (1 to 26). But on lap 30, I found myself in third place and then began to see that I should save the mechanics and the tires for the end of the race because there were 14 laps to go.


"I was still third and on the inside lane, exactly where I wanted to be in case of a restart. I could have run at least half a second faster a lap, but I was saving the engine because I knew there would be more yellows to come and I would need more power then. The first contact was a hard hit on my driver's side and it was a shock. I protected my Toyota Tundra all race long. I think that I was quite patient and waited for my moment. When I was first hit, the problems with the truck began. It broke a brake line which did not work properly after Christian Eckes in truck #18  hit my rear end. It got worst when the engine ran out of power, and I lost quite a bit of speed. That's how my racing day slowly got worse."


Tagliani finished the race 22nd overall, while his teammate Lessard scored his best NGROTS finish with a third place.