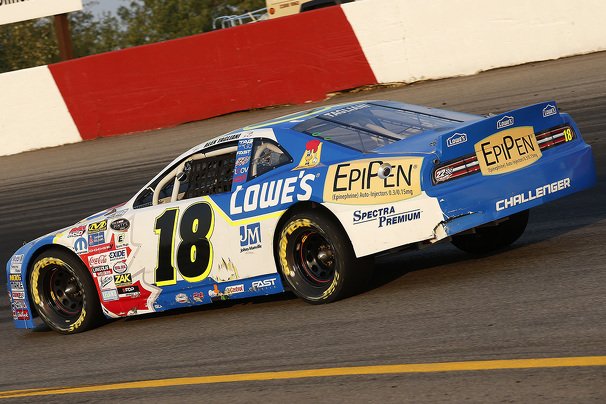 Alex Tagliani concluded his Canadian western swing on a positive note with a fourth place finish in the Luxxur 300, round 8 of the 2017 NASCAR Pinty's Series season held Saturday evening on the one quarter-mile Edmonton International Raceway.

Racecar driver Alex Tagliani concluded his Canadian western swing on a positive note with a fourth place finish in the Luxxur 300 presented by Bayer. Round 8 of the 2017 NASCAR Pinty's Series season was held Saturday evening on the one quarter-mile Edmonton International Raceway located near Wetaskiwin just south of Edmonton, Alberta.


Starting third on the grid, the driver from Lachenaie, Québec, kept his #18 EpiPen-Lowe's-St Hubert-Spectra Premium Dodge in the top seven during the first half of the 300-lap (121 kilometres) race despite an understeering problem that required two interventions from his team during and after the mandatory five-minute mid-race break. Later around lap 193 and for reasons unknown to the team, series officials forced Tagliani to a drive through penalty. This caused the Tagliani Autosport driver to drop near the rear of the field. But, he slowly climbed his way back to the front and with less than 10 laps to go, he was fifth behind LP Dumoulin. Following the last full course caution restart on lap 293, Tagliani moved past his rival to finish fourth.


Alex Labbé won the event ahead of Donald Theetge. Cayden Lapcevich finished third ahead of Tagliani. Eighteen drivers started the race and 15 crossed the finish line with eight on the lead lap. The race was under caution seven times for 53 laps.


"We finally had a decent result this week, but at the conclusion of the practice session around noon time, I felt a little nervous because we were 15th overall," Tagliani said. "The team proceeded with changes on the car and I was more competitive later during qualifying, posting the third fastest time on the score sheet. However, the car was understeering way too much in the first half of the race and it would have caused premature wear on the tires had I pushed too hard. So I waited until halftime so that the team could rectify the problem, which they did. However, they did not go far enough so I made another quick stop shortly after the restart of the second half and the car felt just fine. Then, there were a few incidents during a full course caution and I was given a drive through penalty and we don't know why it was assessed. Even so, I came back from the rear of the field to finish fourth. Edmonton finally turned out real fine compared to the Saskatoon twin bill. The team came through tonight in fine form."


With five races left on the 2017 schedule, Tagliani has moved up two spots to sixth place in the driver championship with 277 points. He his now 31 points behind fourth place held jointly by DJ Kennington and LP Dumoulin. Assessed with a drive through penalty and finishing ninth in the race, Kevin Lacroix has relinquished first place to Edmonton race winner Alex Labbé who now totals 346 points, 10 more than Lacroix. Third in the race, defending series champion Cayden Lapcevich maintains his third position in the standings with 315 points, seven ahead of Kennington and LP Dumoulin.


In 53 NASCAR Pinty's Series starts, Tagliani has five wins, eight poles, 20 top-fives and 33 top-ten finishes. The Luxxur 300 presented by Bayer will air on TSN on Saturday, August 12 at 1 p.m. EDT. Next stop: The Grand Prix of Trois-Rivières.


Drivers and teams to enjoy 15 days off before the Grand Prix of Trois-Rivières
Drivers of the NASCAR Pinty's Series will be off for 15 days before the start of the last stretch of the season, which will begin with Round 9 at the Grand Prix of Trois-Rivières the weekend of August 11-13. Not so for Tagliani and his team, who have a busy off-track schedule. First off, a trip on the south shore of Montreal for the opening the new RONA store located at 2395, Chemin de Chambly in Carignan (J3L 4N4) on Saturday, August 5 from 11 a.m. to 4 p.m. On Wednesday, August 9, Tagliani Autosport will be in the Trois-Rivières area for a visit at the RONA Warehouse located at 4025 Boulevard des Récollets in Trois-Rivières (G9A 6M1) to meet with fans and customers from 4 p.m. to 8 p.m.

The next day, Thursday, August 10, again from 4 p.m. to 8 p.m., everybody will gather at the Réno-Dépôt store at 4575 Boulevard des Forges in Trois-Rivières (G8Y 1V9) with the team hauler and the #18 EpiPen-Lowe's-St Hubert racecar. Fans and media are invited to attend these local pre-race activities and meet with Alex Tagliani who will answer questions, pose for photographs and sign autographs. During these events, Lowe's Canada joins with EpiPen to promote emergency treatment of anaphylactic reactions, which can happen when some people are exposed to a usually harmless substance called an allergy trigger. EpiPen, another major sponsor of Alex Tagliani, manufactures EpiPen® Auto-Injectors for the emergency treatment of anaphylactic reactions.