Montreal, May 18, 2017 - Alex Tagliani will compete in the opening round of the 2017 NASCAR Pinty's Series this Sunday, May 21 on the 3.957-kilometre Canadian Tire Motorsport Park (CTMP) road course located near Bowmanville, Ontario. This will be the first time in his short, four-year Pinty's Series career, that the Canadian driver will take part in the season opener. Over the past few years Tagliani has been spending the entire month of May at Indianapolis Motor Speedway, qualifying for the annual Indy 500.


"I have never been this excited about a first race of the season," commented Tagliani during an interview this week in Montréal. "I eagerly await the opening round. Over the winter season I spent a lot of time securing new sponsors, and with Lowe's and Rotisseries St-Hubert joining my long-time partner EpiPen, I am making a full-time commitment to the NASCAR Canadian series."


This Sunday it will be Tagliani behind the wheel of the #18 EpiPen Lowe's St-Hubert Dodge, fighting right from the start of the season against Cayden Lapcevich, Andrew Ranger and others for top honours. The Quebec driver set the track record in qualifying last September at CTMP averaging 172.122 kph for a one-lap run, but he wants more this time. Tag has a top-five and two top-10s in four starts at this track


Tagliani started his season on Thursday in Mississauga
Even though the season will not officially start until Sunday, Alex Tagliani is already hard at work this week for his new sponsor. On Thursday, he and his team had a busy day at the Grand opening of the Lowe's Regional Support System Centre in Mississauga. On Friday, he will make a promotional visit with racecar and crew at the Lowe's store in Oshawa. Fans are invited to enter pit stop competitions and join Alex for autograph sessions and photo ops. These events will take place every race week at a Lowe's store in the cities where the NASCAR Pinty's Series competes. Fans are invited to attend these pre-race activities and meet with Alex Tagliani.


"It was a busy day at the grand opening of the Lowe's Regional Support System Centre in Mississauga, but what a wonderful sunny day it was for a BBQ," Tagliani said following the day's activities. "Everybody loved the car, and to entertain our hosts, we brought along the Pit Stop competition display so that the employees and guests could learn a little more about what happens on pit road. They had a lot of respect for the guys who have to do the job under extreme time pressure on race day. Everyone participated in the pit stop and had a good time. At the end of the day a $2,500 donation was given to a local school. Friday, we will be at the Lowe's store in Oshawa for another day of promotional activities. It's all great fun, but I am very excited for the season to start."

He hopes to improve on his best ever season in NASCAR Canada
Tagliani concluded the 2016 season in third place with 446 points. He enjoyed his best NASCAR Series season to date, with three wins, two third-place finishes, a fourth, a fifth, a sixth, an eighth and a ninth in 11 starts. He missed the season opener last May to compete in the famed Indy 500.


Alex Tagliani will compete in the opening round of the 2017 NASCAR Pinty's Series this Sunday on the 3.957-kilometre Canadian Tire Motorsport Park road course


Alex Tagliani is already hard at work this week for his new sponsor. On Thursday, he and his team had a busy day at the grand opening of the Lowe's Regional Support System Centre in Mississauga. From left to right, Alex Tagliani, Bryan Baeumler, Sylvain Prud'homme (President of Lowe's Canada) and Sarah Baeumler. 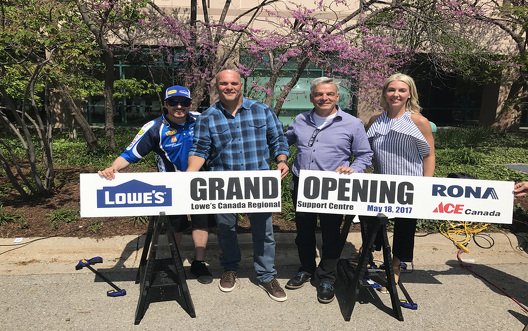