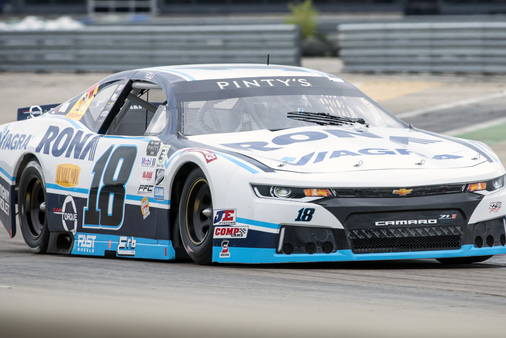 Alex Tagliani's RONA-Viagra St Hubert Chevrolet
Montréal, August 29, 2021 - Racecar driver Alex Tagliani choreographed quite a comeback to finish at the foot of the podium in round 4 of the 2021 NASCAR Pinty's Series held Saturday at circuit ICAR in Mirabel, Quebec. The fourth place finish enabled the former resident of Lachenaie, Quebec to move into first place of the series drivers Championship, four points ahead of Louis-Philippe Dumoulin who know totals 160 markers, and seven ahead of race winner Kevin Lacroix.


Scheduled for 75 laps around the 1.6-kilometre (0,684 mile) ICAR road course, the La Fernandière Summer Classic was extended into overtime to 83 tours following an 11-lap yellow flag situation on lap 70.


The Team 22 driver of the number 18 Chevrolet Camaro RONA - VIAGRA - St-Hubert, who qualified third earlier on Saturday for the scheduled 120-kilometres afternoon race, began his day with a fifth place finish in the morning practise session. At the start of the race, Tagliani maintain his third place until lap 14 when he overtook Andrew Ranger. Tagliani kept on the tail of race leader Lacroix until a restart on lap 39 when Ranger retook what was his. Then, Tagliani's problems began when he was punted and slipped to tenth place overall.


"We had brake problems in the morning practice session, said Alex Tagliani following the end of the race. "The problem continued during qualifying and we don't know what is the cause but it continued during the race. It's a shame because I had, one again, an excellent car.


"I started the race in third place. I managed to pass Andrew (Ranger) for second place (lap 14) to find myself right behind race leader Kevin (Lacroix). Everything was set for a nice battle between himself and I. Unfortunately; I encountered brake problems again at the wrong time during a restart in the rain. I managed to save it but I was punted and dropped to 10th place overall (lap 40)."


Taking matters into his own hands, Tagliani started his race back to the podium on lap 42. He moved past Luc Lesage for ninth place on the following lap, then Dexter Stacey on the 44th circuit, Matthew Scannell on the following lap and DJ Kennington on lap 46 for sixth place. Then it was the long wait to catch Alex Guénette in fifth place, a wait that lasted 37 laps. Tagliani was closing the gap but could not catch him. In the meantime, Marc-Antoine Camirand, who was third behind Ranger and race leader Lacroix, experienced driveshaft problems on lap 69 and retired. This enabled Tagliani to gain another position into fifth. At the last restart in overtime, Tagliani was close enough to overtake Guénette.


"I then started may charge back to fifth place. On the race final restart, I tried everything to finish on the podium, but I think that finishing fourth in these conditions with a problem car is a fine result for the team and it was also good for gathering extra points. It is still a good weekend result since I find myself in sole position of first place in the drivers' standings. Once again the Team 22 Racing RONA-Viagra-St Hubert Chevrolet Camaro was well prepared. We must clear some minor mechanical gremlins that stopped me from battling for top honours here at ICAR. But overall, it is an excellent season start.


"We will now concentrate on the next two rounds at Mosport (CTMP) next week. We usually have a pretty good set up for this track, but we need to fix our brake problems," concluded Tagliani.


Kevin Lacroix crossed the finish line with a lead of 1.189 seconds over Andrew Ranger and 1.995 seconds on third-place finisher Jean-François Dumoulin. Tagliani, back in fourth, finished with a gap of 3.784 seconds ahead of Alex Guénette.  Seven of the 18 starters finished on the lead lap.

Due to inclement weather, the NASCAR Pinty's Series double header scheduled Sunday at Autodrome Chaudière in Vallée Junction was postponed. The next rounds of the series will be held Saturday and Sunday, September 4th and 5th at the Canadian Tire Motorsport Park (CTMP) in Bowmanville, Ontario.


NASCAR.ca has live coverage of each event, including live timing and scoring, on Race Center.