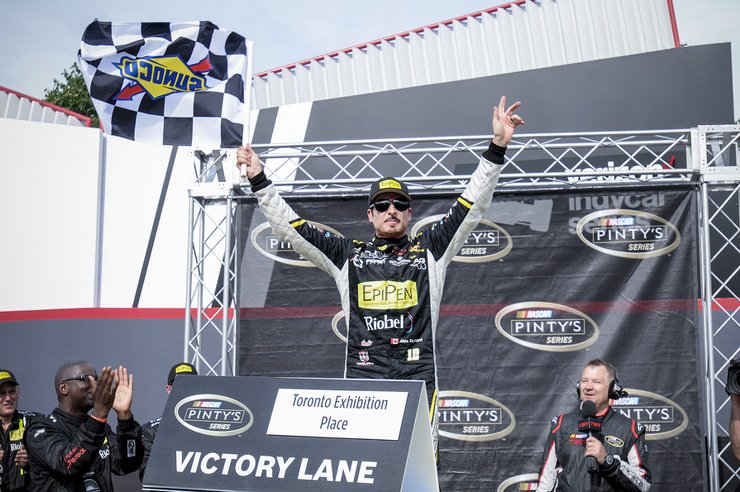 Alex Tagliani enters the Pinty's Grand Prix of Toronto, Round 5 of 13 of the NASCAR Canadian Series, as defending race champion and hoping that a repeat performance during Saturday's IndyCar support race will give him his first NASCAR Pinty's win of 2017. Last year, in the first NASCAR Pinty's race in the Big Smoke since 2011, the Dodge EpiPen-Lowe's-St Hubert-Spectra Premium driver held off Andrew Ranger in the final laps of the race to score his first win on the 2.82-kilometre (1.755-mile) 11-turn street course at Exhibition Place.


"We are excited to be back here in Toronto, a street course race we won last year," said Tagliani. "We are coming off a strong performance at Circuit ICAR were we qualified on the pole and led the first 61 laps in dominant fashion with a very fast car. On the eve of this important meet, we feel very confident of being just as quick. Our accomplishment last week gives us great motivation for the Toronto race. We hope to make it two in a row in Toronto. That's our goal. The Tagliani Autosport team spirit is very high, the chemistry is awesome and we are very excited about the upcoming race. Hopefully the good weather keeps up so we can all enjoy a great weekend."


In 49 NASCAR Pinty's Series starts, Tagliani has five wins, eight poles, 19 top-fives and 31 top-ten finishes.
Race fans not attending the Toronto Indy can watch the replay of the Pinty's Grand Prix of Toronto on TSN on Saturday, July 22 at 2:00 pm EDT.


On Thursday, Alex Tagliani will meet with fans at the Lowe's store in York
Alex Tagliani will visit the Lowe's store located at 1300 Castlefield Ave, York, Ontario, from 11 am to 4 pm this Thursday to meet with race fans, customers and store employees. Tagliani will be on hand for a promotional visit with the #18 EpiPen-Lowe's-St Hubert-Premium Spectra racecar, Tagliani Autosport transporter and crew. Fans are invited to enter pit stop competitions and join Alex for autograph sessions and photo ops. Tagliani will also talk about the launch of the interactive online Food Allergy Canada's Drive the Discussion Contest at the foodallergycanada.ca/tag.


Fans and media are invited to attend these local pre-race activities and meet with Alex Tagliani who will answer questions, pose for photographs and sign autographs. These promotional events take place every race week from May to September at a Lowe's Canada store, RONA, or Réno-Dépôt in cities where the NASCAR Pinty's Series competes. During these events, Lowe's Canada joins with EpiPen to promote emergency treatment of anaphylactic reactions, which can happen when some people are exposed to a usually harmless substance called an allergy trigger. EpiPen, another major sponsor of Alex Tagliani, manufactures EpiPen® Auto-Injectors for the emergency treatment of anaphylactic reactions.


"As usual, mixing business with pleasure is always enjoyable for me because we are also here in Toronto to launch the interactive online Food Allergy Canada's Drive the Discussion Contest at the foodallergycanada.ca/tag. It's an interesting contest for everybody where fans with allergies and friends without allergies can interact; post allergy tips and sees how people live with their allergies and what are their challenges. Lowe's is amazing in supporting this initiative by offering substantial weekly prizes and grand prize of $2500 in a gift certificate card. Promoting this initiative is very important to me. It's the first time we are giving the people with food allergies a platform to interact on their situation. It's a very important contest for EpiPen. I am still excited to represent them and impressed to see their creative way to include fans with our racing program," concluded Tagliani.

Join Alex Tagliani as he drives the food allergy conversation!
Starting July 10, join the food allergy conversation in the Drive the Discussion Contest by posting your favourite food allergy tip on how you safely manage food allergies that can be shared with others. Each post qualifies you for a chance to win one of five weekly prizes and/or a grand prize from Lowe's/RONA. Don't forget to share your tip with a friend - if they comment on your tip, then they will be eligible to win a Lowe's/RONA weekly prize and/or grand prize of their own: foodallergycanada.ca /tag.