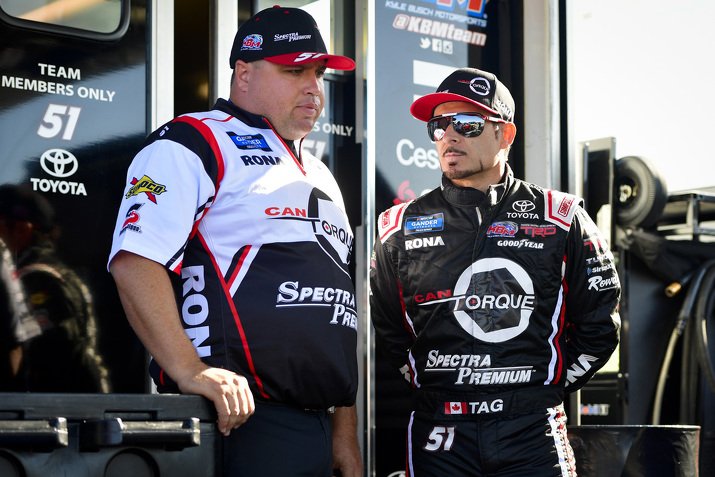 Montreal, August 26, 2019 – Alex Tagliani posted his best ever NASCAR Gander Outdoors Truck Series (NGOTS) results with a second-place finish in Sunday’s featured race at Canadian Tire Motorsport Park (CTMP) located near Bowmanville, Ontario. Tagliani’s Kyle Busch Motorsports #51 Team played their cards right by bringing the Canadian driver in early for his pit stop in the first of the three-race stages of the 64-lap event which set him up for a final showdown in the last leg of the race. Tagliani, who had qualified his CanTorque/Spectra Premium/RONA Tundra in fourth place, finished 13th in the first 20-lap segment, then 8th in the second, but late pit stops by some of the front runners at the end of the second stage placed Tagliani in second place at the restart of the final leg. Tagliani held his own for the final 24 laps but was unable to catch polesitter and race winner Brett Moffitt who was in a league of his own on Sunday. Ben Rhodes came in third place. Sheldon Creed and Austin Hill round out the top five. For the first time in a long time, there were no last lap Corner 10 incident in the NGOTS race at the famed Mosport road course, but the same can not be said about the NASCAR Pinty’s Series final lap on Sunday. Defending race champion Alex Tagliani almost made it two in a row at the CTMP fall battle with his #18 EpiPen/RONA /Spectra Premium Chevrolet but a bump, that if not vicious, was at least intentional, by eventual race winner Kevin Lacroix in corner ten of the last lap of the Green White Chequered, sent Tag down to a fourth place finish in round ten of the NPS held earlier on Sunday morning. Starting second next to polesitter Lacroix for the Total Quartz 200, Tagliani moved into first place on lap 29 of 53 and was leading the race ahead of Marc-Antoine Camirand when the final full course yellow was waved on lap 48. The incident put Tagliani’s lead in jeopardy. Following the restart on lap 52, Lacroix went by Camirand on lap 53, and then ran into Tagliani on the final corner of the race. Camirand finished second ahead of Jean-François Dumoulin.
“Team 22 Racing gave me a great car for the NASCAR Pinty’s race, but the final result is a bit disappointing for them, especially the way it all played out for me in the last corner,” Tagliani said. “I had the opportunity to view the incident from the camera inside of Kevin’s (Lacroix) car and there is no doubt in my mind that he could have avoided me. Instead, we see that he accelerated to hit me hard. In my view, this is not the way to win, but sometimes it’s hard for certain people to resist the temptation. I thought it was a cheap way to win.
“Second place was my best-ever result in the NASCAR Truck Series, but we came here to win. Win for our Canadian fans and our Canadian sponsors like CanTorque, Spectra Premium, whose radiator was installed in my #51 Tundra, and for RONA who set up a contest at the Toronto Indy and the Grand Prix de Trois-Rivières where winners from both cities would get VIP weekend passes with the team this weekend. I believe they had a grand time.
“For the race, we were surprised the new race tires were at least a second a lap slower than the old ones. We were also just missing loading the front during the race in the fast corners, so I had to overslow the truck in the corners and that's what made the difference in trying to catch up with race winner Brett Moffitt. The team made key adjustments on the truck during pit stops that gave me the chance to finish second. But nevertheless, it was a pleasure to race for them and good points day for the 51 team," concluded Tagliani. Twenty-five drivers started the NASCAR Pinty’s race with 18 crossing the finish line at the end of the Total Quartz 200. Fourteen cars finished on the lead lap. The 53-lap race was under full course caution six times for a total of 27 laps. Total Quartz 200 race will be televised on TSN on Sunday, September 1 at 1:30 p.m. In his 10 NASCAR Pinty’s races at Canadian Tire Motorsport Park, Tagliani has one victory and finished six times in the top five and eight in the top 10. In 81 NASCAR Pinty’s starts, Tag has claimed ten poles, won 9 races, collected 27 Top-3/Podiums; finished 37 times in the Top-5 and 56 times in the Top-10. In the driver standings: Major changes in the top two driver standings with Lacroix’s victory and Andrew Ranger’s ninth place finish at CTMP. They are now tied for first with 421 points each with the lead going to Ranger who has a three to two-win advantage over Lacroix. Tagliani collected 42 points by finishing fourth and leading the most race laps at Mosport is still fourth with 394 points but only five away from LP Dumoulin who finished 13th on Sunday. D.J. Kennington rounds out the top five with 365 points. NEXT STOP IN
TWO WEEKS: AUTODROME ST. EUSTACHE, QUEBEC The NASCAR Pinty’s Series visits the 0.4-mile short track at Autodrome St. Eustache for the last time in its history on Saturday, September 7 at 8:30 p.m., as the track will close at the end of the 2019 racing season. TSN and TSN Direct subscribers can watch all NASCAR Pinty’s Series races live on TSN.ca and the TSN app. Watch NASCAR Pinty’s Lucas Oil 250 live stream on TSN.ca or on the TSN app on Saturday, September 7 at 8:30 p.m. Eastern. Check NASCAR Pinty’s listing for exact time. The United States fans can watch all the races live on FansChoice.tv.
Source: Tagliani Autosport