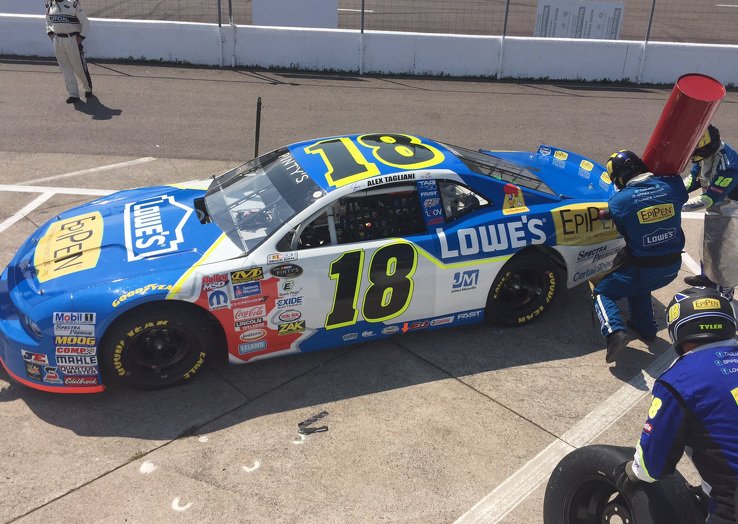 Alex Tagliani finished sixth on Sunday in Round 10 of the NASCAR Pinty's Series held on the high-banked oval of Riverside International Speedway located in Antigonish, Nova Scotia.

Things did not look good for racecar driver Alex Tagliani at the start of Round 10 of the NASCAR Pinty's Series originally scheduled for Saturday evening on the high-banked oval of Riverside International Speedway located in Antigonish, Nova Scotia. During Saturday's sole practice session, Tagliani posted the 10th quickest time out of 15 drivers but unfortunately for him qualifying, which was scheduled for mid-afternoon, was washed out due to light rain, forcing him to start near the rear of the pack of the race that was pushed back to Sunday afternoon. DJ Kennington, quickest in practice, inherited first place for the start of the 300-lap race.


With rain forcing the postponement of the Bumper To Bumper 300 scheduled for Saturday evening, the 300 lap-race on the fast 0.333-mile track got underway on sunny Sunday afternoon. Winner of the race in Trois-Rivières the previous weekend, Alex Tagliani was still hoping for a turnaround in order to push his number of wins to two, even though his car had not performed to his liking during Saturday's practice session. Starting 10th, the EpiPen-Lowe's-St Hubert driver kept pace with the leaders, but was unable to move in on them in the first half of the race. Following the mandatory five-minute break at mid-race, Tagliani was twice involved with back markers but that did not stop him from moving up to eighth place by lap 250. Then he turned on the jets, moving up two more positions and finishing sixth behind Andrew Ranger, five seconds behind winner Alex Labbé.


"Tagliani Autosport with 22 Racing Team did a really good job today improving the car during the race. In the first half of the race, the car was not set up to keep the pace," Tagliani said. "Yesterday (Saturday) after practice, we chose to change the car prior to the cold conditions of qualifying and the race that was going to be run at night. But we did not qualify nor race in the cold, and the car was kept in "Parc Fermé" with that set up and we could not change anything prior to the race on Sunday. I realized in the early goings that the car was not set up for sunny conditions so I patiently waited for a first quick stop during the first half of the race to make changes. At the midpoint five-minute race break, the team completed the change and it was much better. Afterward, I was able to challenge and close the loop in P6.


"Even though things did not look good in the first half of the race, the EpiPen Lowe's team never gave up. It's not the finish we were looking for after our last win, but hopefully before the end of the season, we are going to make some ground in the standings. We are looking for better results in the three races left. We have always looked good at Mosport, but luck has never been on our side. We need to change this in order to look for a strong end of the season finish."


Race winner Alex Labbé took over the lead from Kevin Lacroix on the last corner of the event to score his fourth win of the season. DJ Kennington finished third ahead of Mark Dilley. Fifteen drivers started the race and 11 crossed the finish line with nine on the lead lap. The race was under caution six times.


With three races left this year in the NASCAR Pinty's Series, Tagliani is still sixth in the standings With his win, Alex Labbé increases his lead in first place over Kevin Lacroix.

The NASCAR Pinty's Series (NPS) returns to the Canadian Tire Motorsport Park (CTMP) for the second time this year for their annual Labour Day race weekend. The Total Quartz 200, round 11 on the 2017 schedule, will be held Sunday, September 3 on the 3.958-km road course located north of Bowmanville, Ontario.


But the track has never been kind to Tagliani and never allowed him to show his full potential in the NPS, except in his rookie year when he finished fifth in May 2008. Even if two NASCAR Pinty's Series races are held on the Ontario road course each year, Tagliani has only taken part in four of the 18 races held at CTMP since 2008. He returned to IndyCar racing in 2009 where he entered six races before running full time from 2010 to 2013, winning during that period the 2011 Indy 500 pole position. Although he switched to full time stockcar racing in Canada in 2014, Tagliani never entered the NASCAR Series season opener until 2017, having chosen instead to compete in the famed Indy 500 held in the month of May.


At Canadian Tire Motorsport Park, luck has never been on Tagliani's side. In August 2014, on his return to CTMP, a power steering leak early in the race forced him to pit often but he soldiered on, gaining 11 positions in the last 20 laps to finish 20th. Starting fourth in the fall of 2015, he was running with the leaders with three laps to go when he was punted off the track and finish eighth overall. A year later in early September, he started on the pole, but a mechanical problem at mid-race ended his hopes of winning his first race on this track. Earlier this year at the 2017 NPS season opener, he qualified on the front row, but suffered a mechanical failure with two laps to go while running in third place, sending him crashing into the tire barrier and ending his race.


Is it going to be another crazy weekend for Tagliani on September 3rd or is Lady Luck finally going to give him a break?