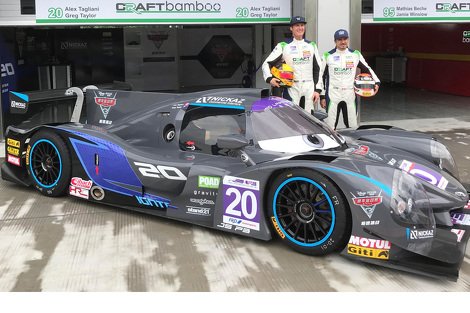 The Zhejiang International road course in China played host to the opening two rounds of the new FRD LMP3 (Le Mans Prototype 3) Series this weekend, and Canadian driver Alex Tagliani was one of four drivers retained by Hong Kong based Craft-Bamboo Racing team to pilot one of their two Ligier JS P3s. Sharing driving duties with Australian Greg Taylor, their number 20 Ligier was sporting a livery inspired by protagonist Jackson Storm from the latest Disney film, Cars 3. The inaugural race on Saturday was a learning experience for the number 20 LMP3 prototype 20 team, which climbed back into seventh place following a first lap spin that sent Taylor to last place.


On Sunday, Tagliani, the driver from Lachenaie, Quebec, showed his true colours after fine tuning the car and learning the subtleties of the 3.30-km layout on Saturday. Starting ninth after experiencing gearbox problems on the Ligier during Race 2 qualifying, Tagliani quickly moved up two positions on the opening lap. During the following 17 laps, he patiently waited for the opening, the nose of his prototype right in the gearbox of French driver Yann Clairy, before he finally moved past him on lap 18. He eventually held third place from lap 21 to 23 before handing the car over to teammate Taylor. Unfortunately, the Aussie lost control of his Ligier on the penultimate lap while trying to pass Chinese driver Neiric Wei for second place. In the process, he lost third place to Martin Cao. Tag's team ended one spot away from a podium finish.


"It's tough to say, but had we not had gearbox problems during qualifying for Race 2, I would not have lost all that time following a car that I eventually passed near the end of my stint." Tagliani said. "The key in a one-make car series is qualifying. Qualifying at the top, you waste no time behind slow cars that are clearly losing ground on the leader. We experienced that today when our sister team won from the pole. But today was a fun race. I enjoyed the feeling of passing six cars in 21 laps. Our performance showed we can win in this series."


Craft-Bamboo Racing's hope for a win was realized on Sunday when the #95 Ligier of Swiss driver Mathias Beche and James Winslow from Great Britain, won from the pole, leading 27 of the 40-lap race. Driving the #95 Ligier dressed up as Lighting McQueen, the lead character from Disney's Cars 3, Beche led the first 20 laps and his teammate Winslow the last seven. In Saturday's race, the #95 Ligier finished eight behind Tagliani.


The next two rounds of the FRD LMP3 Series will be held at Shanghai International road course the weekend of July 30. Follow Craft-Bamboo Racing on Twitter www.twitter.com/craftbamboo and on Facebook https://www.facebook.com/craftbambooracing