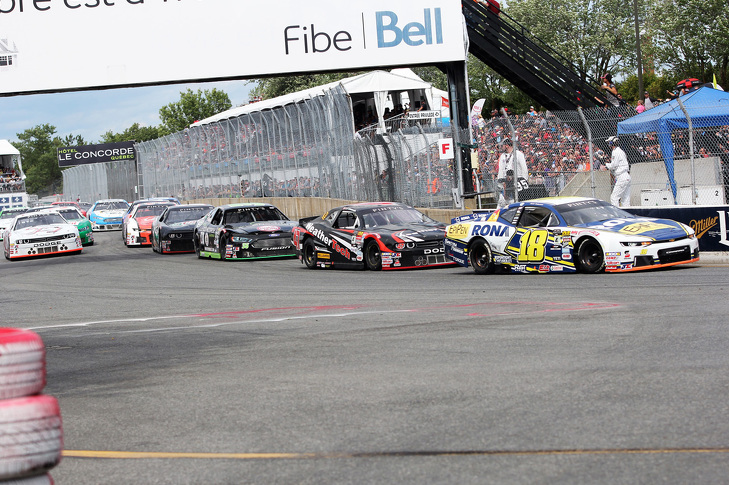 Montreal, August 11, 2019 – Alex Tagliani took the lead on lap 20 and led the next 25 of 50 laps in round eight of the NASCAR Pinty’s series held Sunday at the Grand Prix of Trois-Rivières (GP3R), but lost command of the race when he avoided a backmarker spinning out of control on lap 45. The mishap enabled Louis-Philippe Dumoulin to pass Tagliani and go on to win the race. To avoid the spinning car of rookie TJ Rinomato, Tagliani had no other choice but to take the long way around on the outside line, while LP took the inside track to get ahead of Tag. Jean-François Dumoulin finished third.

“It was a very good race result for the team and 22 Racing did a fantastic job by giving me a great car,” Alex Tagliani said. “We have a pretty good average on this track. Of course, when you win two in a row at the Grand Prix of Trois-Rivières, you want a third one, but in racing, when you finish second, you need to be happy with the results.

“The end of my race could have been disastrous when I encountered car 02 (of TJ Rinomato) because I only had a fraction of second to avoid it. And because I was the first one on the scene and there were no flags displayed to indicate the danger, I made a choice. On the other hand, LP (Dumoulin) who was behind me, had a little more time to react and he made the right choice. When I moved to the outside, I picked up tire residue and it took two or three corners to clean my tires. When everything came back to normal, LP was more than one second ahead of me and with closely matched cars, it was impossible for me to catch him with so little time left in the race.

“As for car set ups, the team was conservative with the Chevrolet #18 RONA/ EpiPen/St Hubert Spectra Premium in order to preserve the tires, but in foresight, we should have been more aggressive.”

The 21 NASCAR Pinty’s drivers entered in Sunday’s “Les 50 Tours Hotel Le Concorde” took the race green flag with only 35 minutes of total track time, as heavy rains washed out much of Saturday. The early afternoon practice session was cut short when downpours caused a safety issue for the six drivers who decided to take the track. A thunderstorm then washed out the late afternoon qualifying session. However, drivers were able to set up their cars during a special Sunday morning 30-minute warm-up session. The starting grid was set per the NASCAR rulebook with Andrew Ranger and Kevin Lacroix on the front row. Alex started fourth on the outside of LP Dumoulin.

Twenty-one drivers started the race with 17 crossing the finish line at the end of the Grand Prix of Trois-Rivières. Fifteen cars finished on the lead lap. The race was under full course caution three times for a total of 14 laps.

In the driver standings:

Andrew Ranger, who finished eighth at the GP3R, still leads the standing with 348 points, but his lead on Kevin Lacroix, who finished fourth on Sunday, was reduced to 14 points. Race winner LP Dumoulin is still third with 328 points but is closing in on Lacroix, while Tag has shaved seven points from Ranger’s lead and remains in fourth with 311 points. DJ Kennington rounds out the top five, 63 points off the pace.

During his 2019 season, Alex Tagliani will race across Canada promoting the sixth annual Summer of TAG, which raises awareness about food allergies, and the importance of educating those afflicted. Alex and Food Allergy Canada, with the support of Pfizer Canada, are committed to creating a safer world for people with potentially life-threatening allergies.