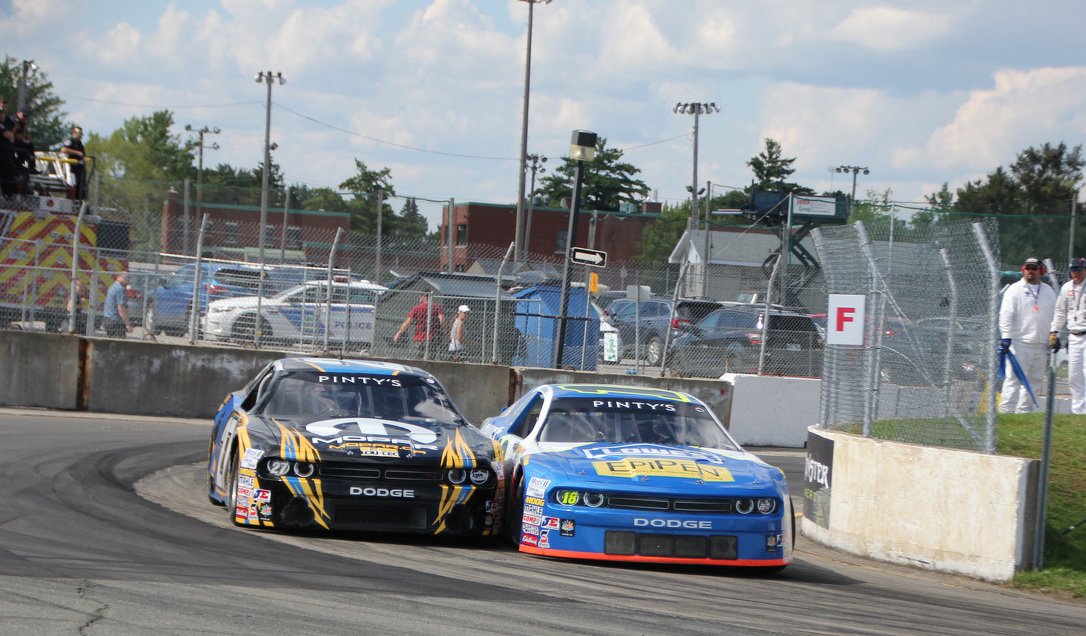 Alex Tagliani scored his first win of the season on Sunday and his first-ever NASCAR Pinty's victory on the temporary street course of Circuit de Trois-Rivières.

Montreal, August 13, 2017 - He might have been ill with bronchitis, but Alex Tagliani was able to put his ailment on hold on Sunday long enough to score his first win of the season and his first-ever NASCAR Pinty's victory on the temporary street course of Circuit de Trois-Rivières. Starting second on the grid next to polesitter Andrew Ranger, the driver from Lachenaie, Quebec patiently waited for the opening on lap 28 to squeeze by Ranger and take command of the Can-Am Le 50 Tours until the overtime 54th and final lap.


Even though this is Tagliani's first NASCAR win in Trois-Rivières, the EpiPen-Lowe's-St Hubert driver had to work hard to score his fifth victory, all series included, at GP3R. After passing Ranger for the lead, he kept an eye on where he was especially following the last full course caution on lap 49 of 50 that sent the race into NASCAR overtime. Tagliani held on to cross the finish line 0.715 seconds ahead of Ranger. Marc-Antoine Camirand finished third


"This is a nice win and it comes at the right time," Tagliani said. "It was a good battle with Andrew (Ranger) today, His car had some advantages over our EpiPen-Lowe's-St Hubert-Spectra Premium car in some sections of the track, and mine was better elsewhere. Early in the race, he was quick and able to maintain a certain gap. On the first restart, I started to put some pressure on him and when I made the pass for first place, I increased the charge and it worked."


"We have been consistently fast in previous races this year, either in Toronto or at Circuit ICAR, but we had a lot of misfortunes that denied us any chances of winning until today where we closed the deal. Today's result is a team victory. They deserve the win because they have been working very hard all year long. I must admit that on the last restart, I kept an eye on my mirrors to see where Andrew was."


Twenty drivers started the race and 17 crossed the finish line with 13 on the lead lap. The race was under caution four times for 13 laps.


In Saturday afternoon's sole practice session, Tagliani was quickest of 20 drivers registered for the event. Later that day in qualifying, he was second quickest behind Andrew Ranger.


With four races left on the 2017 schedule, Tagliani maintains sixth place in the standings with 325 points, but has closed the gap to 19 points on fifth place held by DJ Kennington, and to 23 points on fourth place LP Dumoulin. Alex Labbé is still first with 385 points followed by Kevin Lacroix with 362.


In 54 NASCAR Pinty's Series starts, Tagliani has six wins, eight poles, 21 top-fives and 34 top-ten finishes. Telecast of the Grand Prix of Trois-Rivières on TSN will air on Sunday, August 27, at 1:30 p.m. Next stop: Riverside International Speedway in Nova Scotia.


Next weekend: Nova Scotia
The NASCAR Pinty's Series rolls into Antigonish, Nova Scotia for their annual visit to the high-banked oval at Riverside International Speedway on Saturday, August 19, round 10 of 13 championship events of the 2017 schedule, and the lone trip to the Atlantic provinces. The Bumper To Bumper 300, a 300 lap-race on the fast 0.333-mile speedway, is schedule to start at 8 p.m. ADT (7 p.m. EDT). The one-day affair will have two 30-minute practice sessions starting at 1:00 p.m. and 2:00 p.m. (ADT), with group qualifying at 3:00 p.m. (ADT).


Alex recalls how a race he dominated in 2016 in Nova Scotia turned out to be disastrous when he was the victim of misfortune after leading a race-high 161 laps. He suffered damage while leading after getting hit by the spinning car of a lapped driver, losing nine positions in the process at the finish line.

"Last year, my first-ever NASCAR race at Riverside did not end the way I had hoped," Tagliani said. "I was running away with the race and I had led a race-high 161 laps, but got hit by the spinning car of a driver I was about to lap on lap 230. He had just tangled with another driver when the incident occurred. It was a very disappointing incident, but on the other hand, I discovered a very fast high-banked oval track after missing the previous two years due other commitments. I hope for a better finish this year. With a large points gap to the championship leader, we are going for wins until the end of the year."