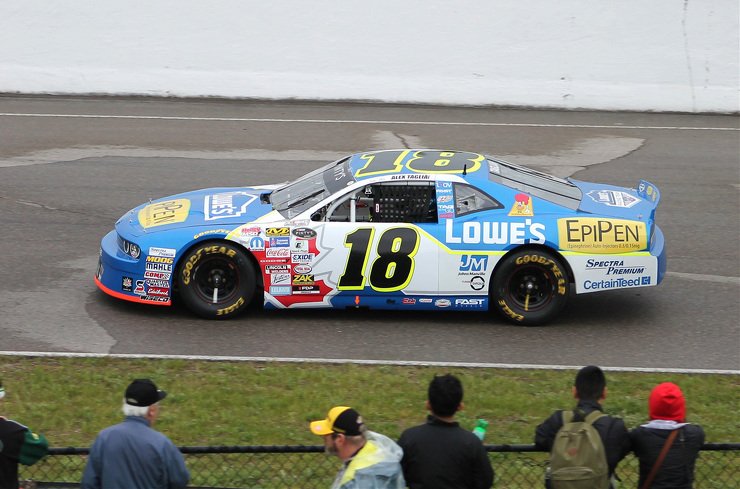 Montreal, May 21, 2017 – Fighting for the lead with two laps to go at the Can-Am 200, held Sunday at
Canadian Tire Motorsport Park road course, Alex Tagliani crashed into the tire barrier, ending any hope of awin. The heartbreaking finish put an end to what had been an excellent weekend for the #18 EpiPen Lowe’s St-Hubert driver, who was quickest in Saturday’s lone practice session and set the second fastest timein qualifying later that day.
Tagliani was running third at the time of the incident.
Starting second next to Kevin Lacroix, the Quebec driver fought with the front-runners through the entire race, leading the event from laps 23 to 35 of the scheduled 51-lap competition. It was the first time in his short, fouryear Pinty’s Series career, that the Canadian driver has taken part in the season opener. Even though he was classified 18th today, he was able to score valuable points, as compared to recording none last year.
“We started the race on wet tires and I maintained second place behind Kevin (Lacroix) for a while,” said the EpiPen-Lowe’s-St Hubert Team driver at the end of the race. “During the first caution period, I entered the pits for slick tires because the track was drying up. I wound up at the rear of the field but eventually moved back up to second place. During a race restart (lap 23), I moved past Simone (Anthony) to lead for a stint. Then it started to rain again, and the team missed a few opportunities to bring me into the pits for a tire change. With two laps to go, the car started to slide on the water as I was entering corner 2, and it took off right into the tire wall. It’s kind of sad because we had a very good car. We lost a good opportunity to score decent points today.”
The Can-Am 200, pushed to 55 laps due to the late race incident, was won by Kevin Lacroix of Saint-
Eustache, Quebec who crossed the finish line 1.916 second ahead of Andrew Ranger of Roxton Pond,
Quebec. Ontario drives Gary Klutt of Halton Hills and Cayden Lapcevich of Grimsby rounded out the top four. Twenty-five drivers started the race and 11 crossed the finish line on the lead lap. The race was under caution five times for 18 laps.
Tagliani has a top-five, and two top-10 finishes in five starts at CTMP. In 46 NASCAR Pinty’s Series starts, he has five wins, seven poles, 17 top-fives and 28 top-ten finishes.
TV coverage of the Can-Am 200 will be aired on TSN3 on Saturday, May 27 at 3:30 p.m. EDT. Round 2 of the 2017 NASCAR Pinty’s Series will be held the evening of June 3 at the Delaware Speedway in London, Ontario.