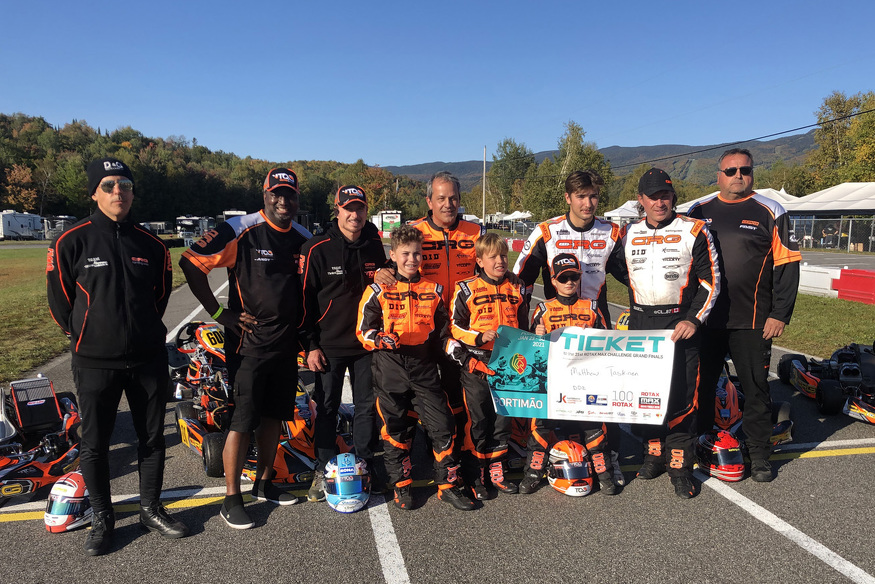 Photo 1 - Ticket for 2021 Portugal championship race. With his class win in the Rotax Micro-Mini MAX for drivers between the ages of 8 to 11, Ilie Tristan Crisan (with a baseball cap and sun glasses behind the ticket flag) won his entry to compete in the Rotax 2021 finals in Portugal. To his right, two TAG Motorsport newcomers for 2021: Louis Thomas Pelletier and Olivier Pichette (with blond curly hair). Behind Olivier, stands Alex Tagliani with his black jacket and his blue helmet at his feet.
Montreal, September 22, 2020 - TAG Motorsport CRG Racing Team reached its target in his first Quebec Championship karting season when Ilie Tristan Crisan finished second in the sixth and ultimate round of Coupe de Montreal Briggs & Stratton LO206 Cadet Series Class Championship held Sunday, September 20 at the Jim Russell Karting Academy in Mont-Tremblant, Quebec.


Winner of the first five rounds in 2020, the young driver from Valleyfield, Quebec only had to complete one full race lap to confirm his class championship. However, he decided to go full spin with his number 20 CRG Black Mirror kart by finishing first in the practice session, qualifying and pre final race before getting caught behind a backmarker on the 14th and last lap of the race. That is when he was past by winner of Louis David Boucher. Prior to that moment, Ilie Tristan Crisan had led 10 of the 14 laps of the hard fought race between the top three drivers who crossed the finish line 12 seconds ahead of fourth place finisher. During the weekend, TAG Motorsport CRG welcomed two new young Quebec drivers at Mont-Tremblant: Louis Thomas Pelletier of Mirabel in the Cadet class and Olivier Pichette of Terrebonne in the Briggs Stratton Junior Class who started their first tests for 2021 in Mont-Tremblant.


A Winning Ticket for Portugal 2021
It was a charged weekend of racing to the young eight-year old champion who also competed in the Canadian Rotax Micro-Mini MAX Championship that awarded each class winner a ticket to competed in the 2021 Rotax Final in Portugal. Unlike the Cadet Class for drivers between the ages of 8 to 11 years old, the Micro-Mini race included drivers up to 13 years old. A mix of two classes in one race. Despite the age difference, Ilie Tristan Crisan stayed in the top 5 in the four on-track competitions that led to the final race. Starting third in the 14-lap final, Ilie ran in second place during 12 laps, including the last eight to finish half a second behind race winner Lucas Deslongchamps, aged 13. Ilie's runner up finish gave him first place in his under 11 class and his ticket for the 2021 Portugal Rotax final.


Matthew Taskinen is the second TAG Motorsport CRG Racing driver to go to Portugal in 2021. The 19-year old driver from New Sarepta, Alberta finished third in the Rotax DD2 class in Mont-Tremblant. He had earned is Ticket to Portugal in Western Canada earlier this season.


Alex Tagliani Returns to Karting
Alex Tagliani returned to karting competition last weekend at the wheel of a CRG 125 kart powered by a TM engine in the Open Shifter & Masters Class. For the former 2011 Indy 500 polesitter, it was a return to karting after a 25-year hiatus. The 46-year old NASCAR driver, from Lachenaie, Quebec started his race from 5th place on the grid and quickly moved up to second one lap later. Unfortunately, he was bumped outside the track by a desperate competitor before completing his fourth lap. Tagliani was not upset by the damages caused to his kart, but by the fact that the driver had hit him so hard that he fractured a rib during the collision. Over the weekend, Tag encountered several engine problems with his newly acquired machine before fixing them prior to the start of his final event.


Tagliani got involved in karting earlier this summer when he renewed his ties with Italian kart manufacturer CRG to become Canadian importer and then expanding his field to Western Canada. Today, after two months of operation, TAG Motorsport CRG will send two of its Canadian drivers at the 2021 Rotax World Championship in Portugal. TAG and his team, with the support of CRG Italy, are working on a racing program that will allow some of his best driver to compete in Europe in 2021.

"Our racing program for young drivers is quite full for 2021, and our priority will be to test them in Europe to evaluate their skills because competition is very strong out there. Top prize to the young driver who shows the most potential will be a major race with CRG Team Works," said Alex Tagliani.


The number 20 CRG Black Mirror is a group 3 kart chassis homologated by CIK-FIA.