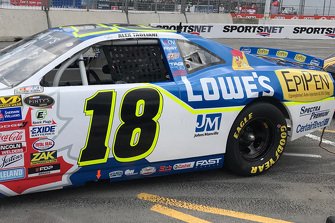 
Following the incident between Tagliani and Ranger, the latter had to pit for repair losing three laps in the process, while Tagliani, driver of the #18 EpiPen-Lowe's-St Hubert- Spectra Premium, was assessed a drive through penalty by race officials. Returning to the track in fifth position, Tagliani slowly moved his way up to second place prior to his mechanical problem. After his second visit to the pits, he went back out in order to collect as many points as possible. Tagliani crossed the finish line in 14th place ahead of Ranger. Both drivers were two laps down.


"A missed opportunity to score much needed points," Tagliani said several hours after the race. "I was satisfied by the way the weekend was moving along until the race got underway. Andrew (Ranger) and I exchanged first place a few times following the green flag, but at one point while we were two abreast in a turn, there was no room for two cars. Andrew was on the outside of the turn and got the worse of the contact. It's too bad the incident occurred, and I'm sorry for Andrew, but that's sometime part of racing. Following my drive through penalty, I had a run at the leaders and everything seemed to be going well. Unfortunately, a rear bar broke destroying any hopes of a good finish. The rear end of the Dodge EpiPen-Lowe's-St Hubert was oscillating left and right on the track, making the car nearly impossible to control. But this is all in the past now. We are going on our annual Canadian Western tour for our next three races on oval tracks. We are going for maximum points in order to get back in the championship hunt."


Twenty drivers started the race on the 2.82-kilometre (1.755-mile) 11-turn street course at Exhibition Place with 15 crossing the finish line, 13 on the lead lap. The race was under caution three times for seven laps.


In the driver standings, Tagliani is now eighth overall with 179 points, only nine points behind fifth place held by Ranger. Race winner Lacroix has increase his points total to 222, 13 more than Alex Labbé who finished fourth in Toronto.


In 50 NASCAR Pinty's Series starts, Tagliani has five wins, eight poles, 19 top-fives and 31 top-ten finishes.
Race fans can watch the replay of the Pinty's Grand Prix of Toronto on TSN on Saturday, July 22 at 2:00 pm EDT.


Canada's national championship for stock car racing will go on its annual Western Canada tour starting in Saskatoon with a pair of 100-lap features on Wednesday night, July 26 at Wyant Group Raceway 0.333-mile oval track. Three days later on Saturday night, drivers will compete at Edmonton International Raceway for a 300-lap race on the quarter-mile oval.