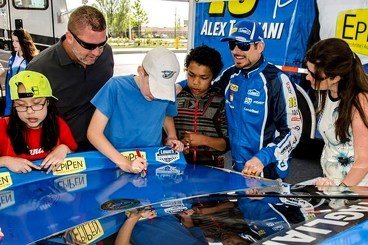 Alex Tagliani has come a long way since the days of trailering his own car to the track each weekend with his dad to go racing. In town this weekend to take part in the NASCAR Pinty’s Series race at Delaware Speedway, Tagliani and his crew first stopped in at the new Lowes London South location on Wonderland Road South Friday afternoon to meet customers and fans.

It’s been more than 30 years since Tagliani cut his racing teeth on the go-kart circuit at the age of 10. Stepping up to the Formula Atlantic ranks in 1996, it was only a few years later that he was making a name for himself on the CART / INDY car circuit.

These days Tagliani is plying his trade primarily behind the wheel of his #18 Dodge on the NASCAR Pinty’s Series circuit with one of his major backers being Lowes Canada.

"We are very excited to support Alex Tagliani, a driver who holds an exceptional track record in the racing world and who shares the same values as Lowe's Canada in terms of excellence and integrity," said Sylvain Prud'homme, president and CEO of Lowe's Canada recently. "We look forward to a very exciting NASCAR Pinty's Series season with Alex and his entire team."

Tagliani said carrying the Lowes logo is an honour, not only because of the sponsorship deal, but because he frequents their stores often.

Lowe's Canada has also partnered with EpiPen — another one of Tagliani's sponsors — to promote a safe environment and raise awareness not only for racers who suffer from food allergies, such as Tagliani, but all those who live with it.

Along for the ride, so to speak, were students from Woodland Heights Public School, who will be a big part of Tagliani’s next race.

Mike Maloney is a reporter with Metroland Media. He can be reached via email