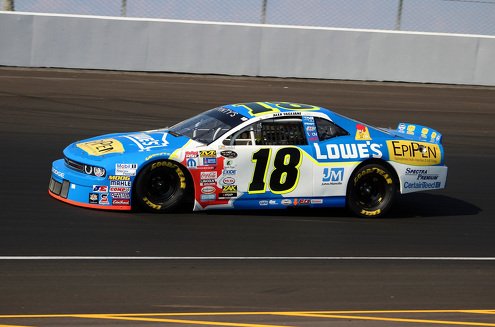 
"We had a fine car at the start of the race and I moved up to third from fifth place on the grid. The car was running real well," Alex Tagliani said. "During our first pit stop, the Tagliani Autosport/22 Racing Team decided for fuel only, saving a tire change for the next pit. Several competitors spent more time in the pits to change all four, enabling us to return on track in fifth place. During the second full course caution (lap 81) the team put a fresh set of four tires on the EpiPen-Lowe's-St Hubert-Spectra Premium Dodge. This enabled us to run with tires that had 50 laps less use than some of my rivals. But while moving up the field, I had contact on lap 136 which resulted in a bent front suspension. A sixth place finish, only five seconds back from the winner while battling handling problems, is quite an achievement. Tonight, credit goes once again to the team, which gave me a very competitive car. We could have finished the season on a higher note, but luck was not on our side."


The 200 lap race held on the one-kilometre (0.625-mile) oval was won, controversially, by Cayden Lapcevich who late in the race bumped his way into the Winners Circle, edging out Donald Theetge, who had a few words to say to the winner after the race. Third place went to Louis-Philippe Dumoulin followed by Kevin Lacroix. Jean-François Dumoulin finished fifth, ahead of Tagliani. Twenty drivers started the race and 16 crossed the finish line with 11 on the lead lap. The race was under caution five times for 38 laps.


In the final standings of the 2017 NASCAR Pinty's Series, Tagliani finished sixth overall with 477 points, 11 from fifth place held by DJ Kennington. Newly crowned champion Alex Labbé only had to start the race to confirm his title. He retired with mechanical problems on lap 62.


In 58 NASCAR Pinty's Series starts, Tagliani has six wins, eight poles, 22 top-fives and 38 top-ten finishes. Telecast for the Pinty's Fall Brawl will be aired on TSN on Sunday, October 1, at 11:30 a.m. ET.