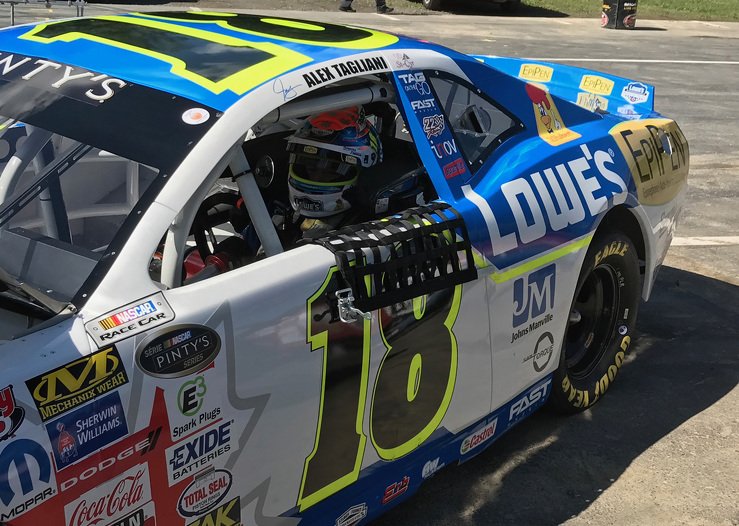 Seventh-place finish for Alex Tagliani at Autodrome Chaudière
Alex Tagliani of Lachenaie, Québec finished seventh at the CSR Express 300 held Sunday at Autodrome Chaudière quarter-mile oval track in Jonction-Vallée located south of Québec City. Starting seventh on the grid, the driver of the #18 EpiPen Lowe's St-Hubert Premium Spectra car had moved up to fifth on lap 186 of 310, but on such a short track where traffic is always an issue, he was unable to move further up the field from his starting position in the final tally.


Cayden Lapcevich of Grimsby, Ontario won the third of 13 events on the NASCAR Pinty's Series schedule ahead of Québec drivers Alex Labbé and LP Dumoulin. A late race incident on lap 299 of the scheduled 300-lap affair sent the event into NASCAR overtime for 10 laps, but Lapcevich held on to cross the finish line half a second ahead of his closest pursuer. DJ Kennington finished fourth, followed by polesitter Donald Theetge. Ontario drivers have dominated NASCAR oval races in Québec and today's series defending champion victory was the 10th in 12 races over the years.


"Obviously, seventh place is not the good result we expected," Tagliani said after the race. "As a successful team, anything lower than a third-place is not what we are looking for. Nevertheless, this has been an unusual one-day event with a compressed schedule. The period between practice and qualifying did not give us enough time to make all the adjustments to the car, which proved to be too tight when we first hit the track in morning practice. But the Tagliani Autosport crew still managed to improve its handling within the time allocated and give me a more competitive racecar. We ran as high as fifth in the race, closing the gap with the frontrunners, but on one of the restarts I got hit pretty hard on the left rear, which moved the rear axle a little bit. This changed the behaviour of the car. Following the incident, I was biding my time trying to come out with the most points available. It was a close race and the top seven cars crossed the finish line within a second and a half of the winner. Running as a close pack, any incident could have created a lot of damage. This was a race that could have gone wrong any way you look at it. In the morning practice session we were tenth, and I thought that we would be in the way of the frontrunners during the race, but the team made the right modifications and we were competitive."


Fifteen drivers started the race on this short track with 12 crossing the finish line. Surprisingly, eight finished on the lead lap. The race was under caution six times for 36 laps.

The Ecko Unlimited 100, Round 4 of the 2017 NASCAR Pinty's Series, will be held Saturday July 8 at Circuit ICAR in Mirabel, Québec.