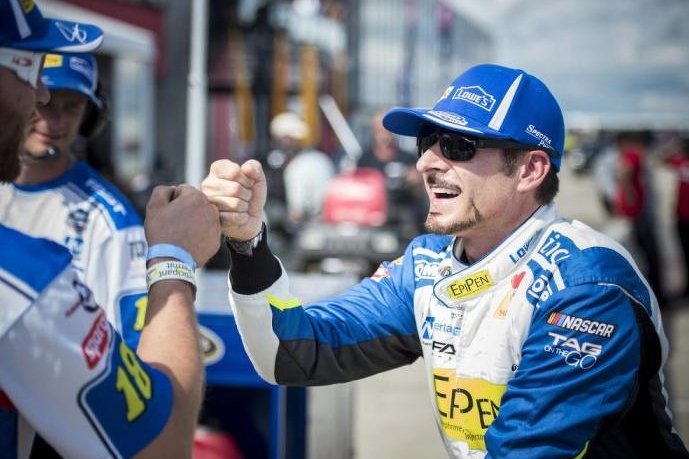 Tagliani Wins Pole but Forced to Settle for Top-Five Finish at Circuit ICAR
Source: Happy moments for Alex Tagliani who celebrated his eight NASCAR Pinty's Series pole on Saturday during qualifying for the Ecko Unlimited 75. It was the third pole at Circuit ICAR for the driver of the #18 EpiPen-Lowe's-St Hubert-Spectra Premium car. He finished fifth in the race.
Starting from the pole, his eighth in the NASCAR Pinty's Series and his third at Circuit ICAR, Alex Tagliani of Lachenaie, Québec dominated the field for the first 61 of a scheduled 75-lap Ecko Unlimited 75 race presented by Continental. Unfortunately, he was pushed off the track twice on restarts near the end of the event held Saturday evening at the 1.1-km Mirabel Airport road course, relegating him in fifth overall in the final tally.


Prior to the fated full course caution on lap 54, the driver of the #18 EpiPen-Lowe's-St Hubert- Spectra Premium racecar had stretched his lead to 3.5 seconds over his closest pursuer. During the side-by-side restart, Lacroix, who was right behind Tagliani, bulldozed his way past and dropped Tag to third. Four laps later, Tag cleanly moved by Lacroix to take second behind Marc-André Camirand. However, another caution, caused by two cars out of fuel, came out on lap 73 pushing the race into NASCAR overtime. Another melee occurred at the final restart causing Tag to finish fifth overall.


On his way to victory lane, Lacroix bulldozed everything in front of him, claiming he had brake issues on the restarts. Andrew Ranger finished second ahead of Camirand. Alex Labbé and Tagliani round up the top five.


"Not the race finish I was looking for, but I have nothing but praise for the EpiPen-Lowe's-St Hubert-Spectra Premium racecar because we were dominant all race long," commented Tagliani following the end of the event. "We led a race high 61 laps and we were running away prior to the last two full course cautions. The Tagliani Autosport crew did a fantastic job in preparing a well-balanced car. This was our race and we were the quickest by far, but as the video replay shows, I was clearly pushed off the track by car 74 (Lacroix) on the second last restart. That was unsportsmanlike. He played bowling with just about anyone in his way. This was the beginning of the end for me because on the final restart someone else pushed me off the track and I ended up fifth, which is not were we want to finish any race. I guess I was at the wrong place at the wrong time. There are ways to move pass other cars without bumping them, but I guess not everyone knows how to do that."


"I'm proud of the team because they were able to give me a highly competitive car on this track, where in the past we always had grip problems on the cement surface. We put on a great show for our sponsors and for the fans that came to cheer on their Quebec drivers. It's not the end I was hoping for, but this is a highly competitive series. We'll take this fifth place finish and move on to Toronto."


Seventeen drivers started the race on this short road course with only nine crossing the finish line. Surprisingly, seven were on the lead lap. The race was under caution three times for 16 laps.


In the driver standings, Tagliani moves up two spots into sixth place with 148 points, only two back of fourth held by LP Dumoulin. Race winner Lacroix is the new leader with 174 points, five ahead of Labbé. Ranger is third with 158.


Race fans can watch the replay of the Ecko Unlimited 75 on TSN on Saturday, July 15 at noon EDT. Round 5 of the 2017 NASCAR Pinty's Series will be held Saturday July 15 on the streets of Toronto as part of the Molson Indy race weekend. Tagliani is the defending race winner.