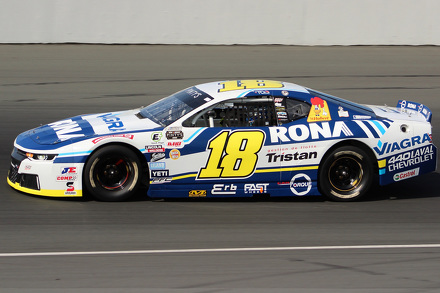 
Tough Luck to the start of both races for TAG Motorsport
As qualifying sessions were cancelled in 2020, starting positions for each race was decided by luck of the draw this season and TAG Motorsport luck was out of sync this weekend as for each of the final two races of the season they twice picked 16th and last place on the starting grid for each of the 125 races at Jukasa.


"For both final races at Jukasa we had to start last because we twice picked the wrong numbers," said Alex Tagliani. "You got to be pretty unlucky to do this twice. For the last four races, we always had someone different pick the numbers for our car. It was never I. It's unbelievable bad luck. I don't know if there is a trick or what. We picked the last starting position twice in two different draws."


Motomaster 125
"The end of our race in the first event was quite sad for me when the Chevrolet Camaro RONA, Viagra, St-Hubert came into the pit with a mechanical problem, 30 or some laps before the end of the Jukasa Motomaster 125," continued Tagliani. "I call this race a lost track time opportunity because we could have worked on improving the car at the end of the race to get it better prepared for the second evnt, if we had not encountered this problem. The 22 Racing Team solved the problem something like 12 minutes before the start of the second race. Because the team spent some much time trying to fix the problem, it did not have enough time to get the car properly ready for the upcoming Pinty's 125. Fortunately, I quickly realized that the car was more competitive than it was in the first race."


Jason Hathaway led 57 of the 125-lap race to score his third win of the season, six seconds ahead of runner up Kevin Lacroix. Louis-Philippe Dumoulin finished third ahead of D.J. Kennington. Tagliani was classified 14th, completing only 94 of the 125-lap race. The race was under caution twice for 11 laps. Sixteen cars started the race.


Pinty's 125
The second race of the day was won by two-time series champion D.J. Kennington who led 99 of the 125-lap Pinty's race, crossing the finish line four seconds ahead of Quebec City ace Donald Theetge. Jason Hathaway finished third ahead of Kevin Lacroix and Alex Tagliani. The race was under caution six times for a total of 36 laps.


"The car was much better in the second race as I moved up the field quite rapidly reaching fifth place a little before the halfway point of the race," continued Tagliani. "I kept fighting on to improve my position, but the car was a bit too twitchy.


"Then, there was an incident that caused a red flag situation on lap 81 and we later ran eight laps under a yellow flag caution before we got going again. I don't know what would have happened it I would have pushed on Kevin (Lacroix) a little harder while he was in fourth place in the Pinty's 125. I had noticed that my car was a little faster than his. I tried three or four times to go inside him, but it did not work. If the championship was at stake, I may have acted differently, but I did not push it. At the end of the day, this was a good practice run to see were the car stood following the changes we made since 2019. I am quite satisfied with the results. To go from last to fifth in this race proved that we have a car to fight with the best of them. It's a good season ending practice," concluded Tagliani.