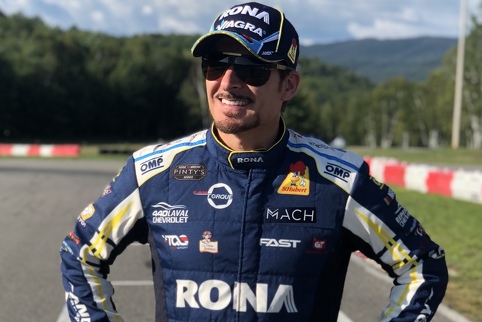 Alex Tagliani
Montréal, March 3, 2021 - Racecar driver Alex Tagliani will very busy this spring with a business and two racing programs in action in early May. With all this in mind, it does not stop the prominent Quebec driver to spend a lot of his time thinking of driving his Chevrolet Camaro RONA - VIAGRA - St-Hubert in the opening rounds of the NASCAR Pinty's Series. Last year at the Salon International de l'Auto in Québec City, car #18 was unveiled with VIAGRA as its new co-primary sponsor next to RONA and St-Hubert. With this sponsorship, the iconic VIAGRA brand was celebrating its 20th anniversary in Canada. The Team 22 Racing number 18 car will also be sporting secondary sponsors colours such as CanTorque, Fast Wheels and 440 Laval Chevrolet amongst others on tracks in Ontario and Quebec.


During the shortened 2020 non-championship season, Team 22 Racing used the oval races to test numerous set ups in order to validate what worked best or what made the car unstable and difficult to drive on this type of track. On road courses, car #18 has always performed well if we look at past results with a couple of wins at the Grand Prix de Trois-Rivières, Toronto Indy and a win at the Canadian Tire Motorsport Park. We realise that it's not the performances on road courses that stopped the team on its way to a championship title but performances on ovals.


Back in 2018, Alex was runner-up in the final standings a few points back from the champion. Everything was played out in the final race of the season at Jukasa Motor Speedway oval track. This winter, it was Team 22 Racing's mission to go back to where they were in 2018 to make 2021 a very competitive season for car #18. It is for this reason that Tag's mechanics worked so hard over the wintertime to get the RONA - VIAGRA - St-Hubert car in top shape for the upcoming season.


"Despite the pandemic that keeps spreading its attacks on people, my 2021 racing seasons will be very busy," confirmed Alex Tagliani. "The 12 NASCAR Pinty's races will be held at eight tracks with five in Ontario and three in Quebec. Three of events will be twin feature races.


"I am really looking forward to get back on track, as are the race fans eager to see us compete door-to-door for the win at every corner of the track.


"NASCAR did amazing job behind the scene and worked closely with the promoters to have an early schedule and to ensure a race season for the drivers the crew and the all the Fans In Canada. We all learned the hard way, with the pandemic, I think now we are all going to appreciate racing even more", concluded Tagliani.


The NASCAR Pinty's Series 2021 season
The NASCAR Pinty's Series returns with a full racing season for 2021 with 12 races on its schedule and Alex Tagliani is ready to go. On May 23, he will be at the wheel of his Chevrolet Camaro RONA - VIAGRA - St-Hubert for the opening round at Sunset Speedway in Innisfil, Ontario were he won in 2015 and in 2016. A month later on Saturday June 19, NASCAR drivers will head to the 0.625-mile oval track at Jukasa Motor Speedway located near Hamilton for the first of their two races there, the other being the season finale on September 25.


Then, Team 22 Racing will be competing on July 18 at Flamboro Speedway in Millgrove, Ontario for their first of three twin races of the season. A month later, it's the beginning of the busy part of the schedule for Alex with the Pinty's Series in Quebec for the first time. On Sunday August 15, it's the annual Grand Prix de Trois-Rivières, always filled with door-to-door and bumper-to-bumper restart thrillers. Two days later, the series is back in Ontario for its first-ever dirt track race at the Ohsweken Speedway. Tag's Chevrolet Camaro RONA - VIAGRA - St-Hubert will return in Quebec at the end of August for three races at two tracks in two days. Saturday, August 28, round 7 of 12 of the 2021 schedule will be held at Circuit ICAR in Mirabel and the next day, Autodrome Chaudière in Junction Vallée south of Québec City will host the second twin race of the schedule. The season ends in September with tree races in Ontario. The last twin race date awaits Tag and Team 22 Racing at Canadian Tire Motorsport Park road course on Sunday September 5 and 20 days later Jukasa Speedway host the season finale to crown the 2021 season champion.

Fans can still Alex Tagliani during the off season by visiting www.tagliani.com, or by following him on Twitter at @TAGLIANI, or @TAGLIANI18 on Instagram and like him on Facebook at www.facebook.com/Tagliani.
Source: Tagliani Autosport