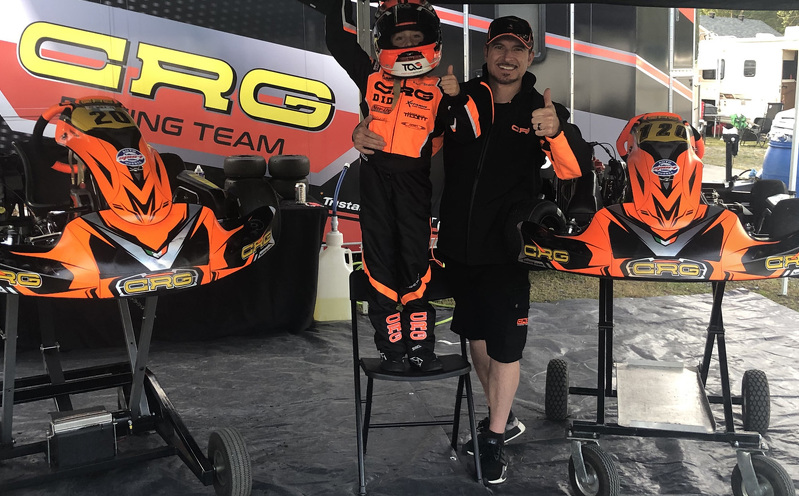 ILIE TRISTAN CRISAN with Alex Tagliani
Montreal, September 7, 2020 - Ilie Tristan Crisan claimed top spot in the Coupe de Montreal Briggs & Stratton LO206 Cadet Series Class Championship on Sunday, September 6 when he won Round 5 of the series held at St-Hilaire Karting. After winning the pole and the race pre final event, Ilie continued on his way by winning the final race of the day in the Cadet Class to secure claim on the 2020 Coupe de Montreal title. TAG Motorsport's young protégé brilliantly drove his number 20 CRG Black Mirror kart to beat his opponents on a very changing track.


The eight-year old champion scored his third of five wins with his recently acquired GRG Black Mirror kart imported in Canada by Alex Tagliani who was mighty proud his day's work. With his victory on Sunday in the Coupe de Montréal final at circuit de karting Mont St-Hilaire, the young driver only has to show up in 15 days at circuit Mont-Tremblant and drive one lap to win the title in the Cadet Class of Coupe de Montreal. This should remove some of the pressure he will face in the Rotax Mini Max Canadian Championship final.


"All I have to do is run on lap at Mont-Tremblant to officially win the class title and for this I have to thank my family, especially my father and mother that were behind me throughout the season and also a special thank you to Alex Tagliani for his coaching and support," said Ilie Tristan Crisan. "My kart ran very well again today. I was never really nervous about the outcome. In the race, I was not at my best as my kart was sliding a lot because of the track conditions, especially in one corner. Tire pressure could also be a factor in this case because I don't think it was right. When a driver went by me, I would immediately come back on him to retake first place."


"Now, I am getting ready for the big race in the Mini Rotax class at Mont-Tremblant in 15 days where I can win a ticket for the World Championship in Portugal."


TAG Motorsport is now getting ready for the final Coupe de Montreal event on September 19-20 at Jim Russell Karting Academy in Mont-Tremblant, Quebec where Ilie will also compete in the Rotax Mini Max Canadian Championship.