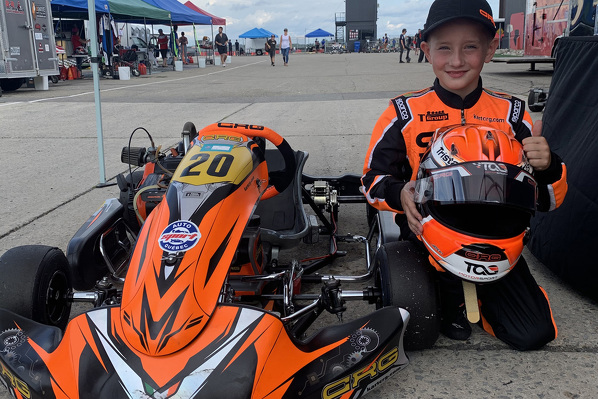 Driver Ilie Tristan Crisan at ICAR in Mirabel
Montreal, August 25, 2020 - Eight-year old Tristan Crisan wrote his name in the record book when he won a fourth consecutive karting race in round four of Coupe de Montreal Briggs & Stratton Cadet Series held Saturday, August 22 at Circuit ICAR in Mirabel, Québec. Starting second on the grid, TAG Motorsport's young protégé drove a masterful race at the wheel of his number 20 CRG Black Mirror kart when he went bye polesitter Louis David Boucher before crossing the chequered flag with a lead of 0.580 second on his rival. On his way to victory circle, Ilie posted fastest lap of the race with a lap time of 55.266 seconds to earn driver of the day honour at ICAR.


The two drivers drove side-by-side nearly all race long before crossing the finish line 10 seconds ahead of third place finisher. The young eight-year old winner scored his second win with his new GRG Black Mirror kart imported in Canada by Alex Tagliani. Prior to the day's final Cadet event, Ilie had won the pre-final race. With four final Series wins this season, Ilie his first in Cadet Series standings. TAG Motorsport is now getting ready for the final two events of the season: September 5th at circuit Saint-Hilaire and September 19-20 at Jim Russell Karting Academy in Mont-Tremblant where Ilie will also compete in the Rotax Mini Max Canadian Championship.


According to Alex Tagliani, Ilie was in control of both his race and saved his tires very well, which enabled him to post fasted lap of the main race near the end of the event.