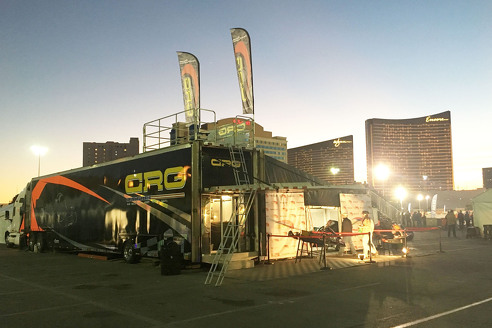 CRG Race Hauler
Montreal, October 26, 2020 - TAG Motorsport - CRG Canada karting team is proud to announce their early drivers line-up that will compete in the Orange and Black karts in 2021. New drivers will run the CRG team's colours to compete in different categories of Coupe de Montreal championships and selected Rotax karting races in eastern Ontario as well as some events in the United Stated, if pandemic rules are softened at the border. Over the course of last summer, Alex Tagliani became the exclusive CRG kart chassis dealer for Canada. CRG is a renowned Italian kart manufacturer that helped, over the years, young drivers make their way from racing European CRG karts championships to Formula 1. Some of the new TAG drivers will compete this year in one or several classes of the Briggs & Stratton and Rotax engines in Coupe de Montréal Championships and in some of the Rotax National Championships.


To support all these drivers, TAG Motorsport - CRG Canada has acquired all the necessary equipment needed that includes the 18-wheel trailer truck to transport all the karts and spare parts, as well as the huge canopy attached to the hauler to prepare and repair all the karts at the track. Of course, Alex will have his team at the races with the goal to support technically every CRG clients in the paddock. With all these additions and drivers, the TAG Motorsport - CRG Canada karting team as added a satellite work team headed by chief mechanic Paul Heng of Heng Performance to manage the overcharge and insure to give drivers the best performing karts during double-header race weekends in Québec and Ontario championships.


Below is the group of Quebec drivers that will join 2020 Briggs Cadet Champion Ilie Tristan Crisan to compete in CRG Karts for TAG Motorsport in 2021. TAG was very proud of Ilie during the season. He showed speed, aggressivity and he completely dominated the entire category.


Jeremy Cyr, aged 9 from St-Hilaire, QC is a rookie who will begin his first year in karting and drive a CRG Black Mirror kart in the Briggs & Stratton Cadet class. He will join Louis Thomas Pelletier (#13), also aged 9 from Mirabel, QC. Pelletier, who showed quickness in the last test of the season, will also get his hand on a Micro Mini Rotax class kart in the National Championship in kart #113. A couple of 12-year old will be driving CRGs in the Rotax MAX Junior class: Louis David Boucher from Saint-Sauveur (#244) one of the fastest driver will represent the team in Rotax Jr, and Olivier Pichette from Terrebonne (#209), who impressed while driving karts for the first time in his life this year. They will be joined by 14-year old Francesco Catania of Outremont, who returns to competition in 2021 in the Rotax Jr Class. Pichette will also compete full time and prioritized the B&S Junior class in his #609 CRG kart.


In Open Shifters Masters, the starting grid will be challenged by Louis-Jean Boucher #966 of St-Sauveur who showed tremendous speed this year and, on a part time schedule, Jean-Frederic Laberge from Montreal and newcomer Frederic Simard from Beauport. Mathieu Demers from Chateauguay, the 2020 Briggs & Stratton Masters class champion, returns this year with his number 869 CRG kart to defend his title. Ronnie O'Borne will start his first season in the DD2 master class on a part time basis.


Not all the CRG drivers will be part of TAG Race Team but will still be running in the Orange and Black colours. Charles Gauthier the young 22-year old from Sorel, QC, a driver with big potential, will run in the Open Shifters class with kart #999. Mike Larouche from Montreal will also be racing in Briggs & Stratton Masters, as will Mario and Mathieu Martin in their CRG karts #800 & #807.

According to Alex Tagliani, this is only a beginning because the team is also planning on a TAG Racing Program for its drivers. "With more great news coming, this makes this very exciting, and we certainly want to see all our drivers succeed, most importantly we want them to develop and grow in the world of motorsport by supporting them with a personalized approach depending on their needs but always keeping a high level of respect for the sport by staying humble while doing it. There is no doubt that the upcoming racing season will be very busy for all the personnel at TAG Motorsport. In the final race of 2020 at Circuit de karting Mont-Tremblant during the Canadian Open last September, the team managed to help two drivers, Ilie Tristan Crisan and Matthew Taskinen, secure, tickets to the World final in 2021. That race also enabled us work with our dealers from Ontario and Western Canada and plan on adjustments we needed to improve on the team for next year in order to reach our customers' goals. Right now, we are still talking with a couple of very competitive drivers who want to join our racing team. Everything is ready. We are only waiting for the race schedules to become official to enter the fray."


The TAG Motorsport - CRG Canada team will have their 2021 head offices located at the future E-Karting Centre in the Montreal region.


A word from Giancarlo Tinini
"We are extremely proud to be associated with Alex Tagliani in Canada," mentioned Giancarlo Tinini, owner of the Italian CRG Kart manufacturer. "We worked a lot with Alex when he began racing many years ago. He is a very passionate karting enthusiast and his quick success in Canada this year as a team owner is very impressive. Alex has our full support in this venture and we are working on new ideas on how we can promote some of these upcoming young drivers that we hope to see compete here in Europe."


Two drivers will again be based in Alberta
One again this year, at least two drivers will compete next summer with CRG karts in Western Canada. Matthew Taskinen aged 19 from New Sarepta near Edmonton, returns in 2021 in the Rotax DD2 class in his CRG no 487 kart. Matthew earned his free pass for the 2021 Rotax World Championship by winning the Canadian Western Rotax DD2 class championship. The World Championship event will be held in Portugal.


More details will be available when the 2021 Canadian karting schedules is announced
Source: TAG Motorsport